Zippy and I became friends back in 2010 when he wandered into the garden with a note on his collar that said “Zippy! I Wander! Please return me to my home”. He was a kitten so I abandoned common sense and actually carried (more like fought) little guy around the block and back to his own front yard.  Just as I got to his mailbox he jumped out of my arms, ran around to the back of the house and completely disappeared. I figured he was back in familiar territory so I turned and started my walk back home. Needless to say, after taking a good 20 min away from my chores to deliver him back to his home, I was less then delighted to find him back in my yard, waiting for me return from his. 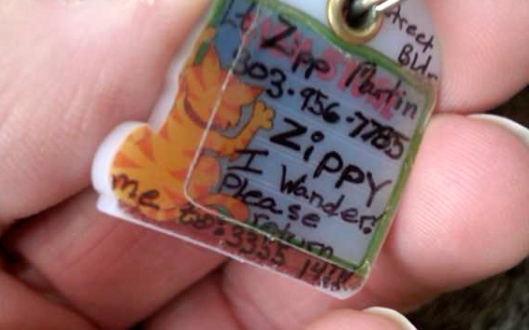 One of Zippy’s moods

The only thing on my list after The Annual Bolder Boulder 10K was mowing the yard. I put on my yard clothes and made my way outside to find Zippy waiting on the deck and popping his tail against the boards the way cats do when they’re looking to pounce. I don’t know how this little guy learned to push my buttons but I swear he does it better than any frenemy I’ve ever had.  When he’s in this mood he always starts by running through my legs to block my way and then swatting my calves when I get past his blocks. If I don’t take the bait and fight back he runs to the garden, makes direct eye contact, and then starts digging as if he’s going to use the bathroom. It’s the craziest thing! He knows digging in the garden boxes usually leads to an unhappy Zippy and yet he’ll sit there until I either pull out the hose to spray him or chase him down and pop the living daylights out of a hind leg. In this case I opted to pin his head in the dirt and paint his little back porch red.

In a FIT, he scampered off to the far end of the yard and glared at me for the 40 + minutes it took to mow both the front and back yards. Eventually I lost track of him (and his angry stare) as I continued to weed and water. It wasn’t until I pulled out the clippers to do some edging that I noticed he was no longer watching me but instead was hopping around the base of the apple tree like a rabbit on crack.  Realizing he had cornered a little creature and was too chicken to actually catch it I called out to see if I could to break his concentration long enough to give whatever it was he was molesting a chance to scurry away but it didn’t work. He was so intent on keeping tabs on whatever it was that he didn’t even notice me walking up until I had him by the scruff… and of course, with my focus on Zippy, I didn’t register the 3′ snake he had pinned into a tight coil at the base of the tree until I too was within striking range.

Let me take a moment to share that when it comes to Colorado snakes I lack the confidence I had in Georgia to grab them up and move them to new homes. The colors and markings in Colorado’s flora and fauna are just far enough off from the ones I know from Georgia that it’s hard for me to trust that I’m not grabbing something poisonous. And because we do have plenty of rattlesnakes in the area my first reaction when I see a snake is a little more than hesitation…

Which is what Zippy learned when I jumped back and screamed “Holy Jesus!!”. At this point all hell broke loose. The snake was clearly pissed and started striking in my direction, Zippy started screeching because of my tightened grip on his scruff and I was doing everything in my power to jump back to a safe, beyond 1/3 of the snake’s body length, distance from my squatted position. Before I was able to size up the situation Zippy twisted out of my grip and actually landed on the snake which immediately struck at him and caused Zippy to jump about 2 feet in the air. I’m pretty sure it got his front paw on the way up. In this moment the snake tried to get away but Zippy pounced again and chomped on his tail. The snake coiled again and jumped at Zippy but this time I was able to grab Zippy’s tail and yank him away from the snakes reach… which caused more cat screeching followed by a flurry of angry swats on my arms and then of course me letting go long enough for him to take another jump at the snake.

We kept this Disney-esque dual going all the way across the yard until I was finally able to get a solid grip on Zippy and contain all of his claws and teeth in one big bear hug long enough to nudge the stunned snake to safety under the house. After 5 min of petting and cooing I was able to calm Zippy down and shoo him through the little path he’s made between our two houses and then I took a moment to just sit still and chuckle at myself.  After wrapping up the yard I came inside to do a little research… 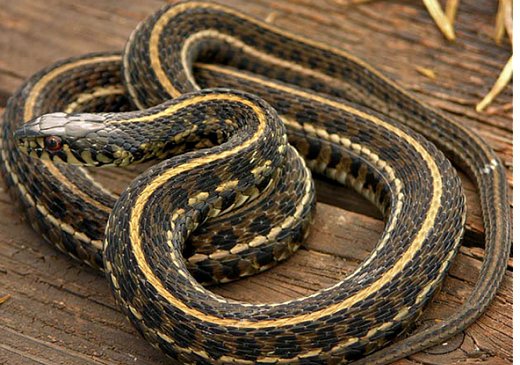 I’m pretty sure this is what all that fuss was about. The Plains Garter Snake. The one in my yard didn’t have the uniform stripes (most likely because of Zippy’s bite marks) or the vibrant color, but everything else about him fits the description to a T… and because Zippy didn’t die in my arms I’m pretty sure it was not some sort of obscure rattler that uses the markings of a non-poisonious snake to attract its prey.